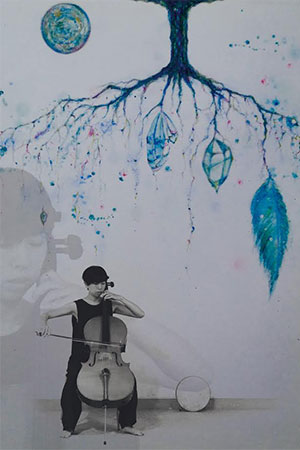 She began playing the electric piano at 5 years old and the flute at 10 years old.
Like other members of her family, she was naturally good at arts, specially painting in her childhood.
At the high school entrance ceremony, she had a fateful encounter with the cello.
She began playing the cello in the school orchestra club.
Fortunately she could take lessons from Yoritoyo Inoue who had taken lessons from Pablo Casals.

After graduation from university, she went to India to study Yoga. In Varanasi, she found a mandolin. She travelled with it and did jam sessions with many musicians from many countries.
Through yoga, her mind became more free and creative and she became aware of how important music is for her.
To find a mandolin master and visit the musicians she had met in India, she flew to London.Then she visited Scotland, France and Portugal. In Barcelona,she met the mandolin master, Antonio Restucci, and took lessons with him. Travelling in Spain gave her a lot of inspiration for music and life. There were so many marvelous musicians.

After coming back to Japan, she began performing as a cellist in bands. She was exploring the possibility of using her cello in the native music of Japan, Africa, Hawaii, in reggae and so on.
Living with a beautiful bird, it became natural to sing. She began composing songs and poems drawing from nature.
In the winter of 2012, she started performing solo. Her first CD was released in the autumn of 2014. She is now performing in creative and traditional space collaborating with many other artists.